Book One in the Trilogy WHO- Holiday Towley is a loving perfect wife and mother that holds a deep dark secret. WHAT- Holiday’s dark secret is revealed when her daughter’s safety is compromised by unforeseen circumstances. Holiday’s life becomes more complex when she finds out the truth of who she really is. WHERE-In a richly beautiful suburban neighborhood surrounded by astonishing views in Michigan. WHY- Holiday soon finds out she has a special gift that will change her life and maybe protect her daughter from the secret life that she has kept hidden. REVELATION – I have found that the truth is always better for the one you love than a lie. I have only recently gained this insight. My life is crazy right now. I was satisfied with my life as it was, and would have continued with it. Never in my wildest dreams would I have envisioned being forced to go up against a mother figure. I have been taken from my comfort zone and placed in unfamiliar territory. I am not scared though, just willing to do whatever I can to regain a small portion of sanity. I know it may come with a price, but today the price will not be me or my family. She declared war on me first. Review Readers cannot distance themselves from Holiday’s affectionate family moments or from her emotionless murders because she recounts her own actions, making the sex scenes steamier and the killings more shuddersome. ~Jill Allen, Clar ion Reviews
‪#‎FREEALERT‬ ‪Spies, Lies, and Lust all in this Trilogy! Meet Holiday Towley the supernatural assassin who’s living a double life! She’s an assassin, mother and entangled with two men! Get the first two copies for FREE!!The SleeperAmazonUS – http://tinyurl.com/qx2arslAmazonUK – http://tinyurl.com/ktruage
B&N – http://tinyurl.com/ov7k9q7
iTunes – http://tinyurl.com/n3ph9zj
NookUK – http://tinyurl.com/pposfef
Kobo – http://tinyurl.com/orvneut

AWAKENS BOOK 2 -The Secrets of Ghosts Trilogy
WHO — Holiday Towley – wife, mother, wedding planner and secret government assassin. WHAT — A young child under threat. A secret power with unknown consequences. A security organization gone rogue. WHERE — Breathtaking locations around the World. WHY — Holiday’s life was complicated enough when all she had to do was plan weddings and kill people. Now with her daughter threatened by the people she should have been able most to trust, and her marriage threatened by the handsome and enigmatic David, she faces the ruin of all she has worked for.
‪#‎FREEALERT‬ ‪
Awakens
AmazonUS – http://amzn.to/1m7MEkz
B&N – http://bit.ly/1HRM3gX
Redemption ONLY $1.99 ‪#‎LimitedTime‬
Amazon – http://amzn.to/1Rwd752
iTunes – http://bit.ly/1GMbAaP
B&N – http://www.barnesandnoble.com/w/redemption-sole…/1122908348…

Grab for 1.99
Redemption BOOK 3
18+ for language and sexual content! WHO – I am Holiday Towley a killer who can’t be a wife nor a mother. WHAT – The only thing I can do is kill everyone! WHERE – There will be no hiding places. WHY – My life is no longer complicated. It’s clear of what must be done. I didn’t start this war, but I will end this war. So, when the dust settles everyone I love will be safe and that will be my REDEMPTION! 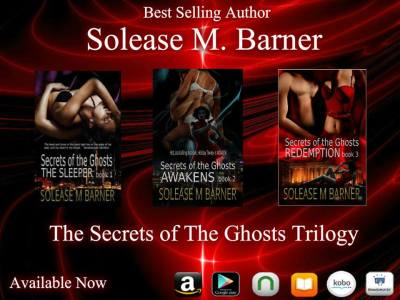