You don’t greet your new boss dressed like an underage rent boy. But when Jack Horwood—ace hacker and ex-MI6 operative—opens the door to Gareth Flynn, he’s too busy to worry over details like that. And anyway, his potential new boss is his former Commanding Officer – the same guy Jack has had a crush on since he was seventeen. So he should understand, right?

When he applied for the job in Nancarrow Mining’s corporate security division, Jack had hoped for peaceful days repelling cyber attacks. Maybe a bit of corporate espionage on the side. His plans didn’t include rescuing abused children, hunting pimps, or dealing with his overly protective and hot-as-hell boss, Gareth Flynn.

Walking away is not an option. Jack never takes the easy way out. More than that, meeting Gareth raises old ghosts that Jack needs to put to rest. Rescuing kids. Taking risks. Saving the day. Jack can do all that – but deciding what to do about his attraction to Gareth isn’t the sort of cloak-and-dagger game Jack plays well. Yet Gareth, strong and smart and always on hand when needed, might be Jack’s salvation.

Jackie Keswick was born behind the Iron Curtain with itchy feet, a bent for rocks and a recurrent dream of stepping off a bus in the middle of nowhere to go home. She’s worked in a hospital and as the only girl with 52 men on an oil rig, spent a winter in Moscow and a summer in Iceland and finally settled in the country of her dreams with her dream team: a husband, a cat, a tandem, a hammer and a laptop.

Jackie loves stories about unexpected reunions and second chances, and men who don’t follow the rules when those rules are stupid. She has a thing for green eyes and tight cyclist’s butts and is a great believer in making up soundtracks for everything, including her characters and the cat.

And she still hasn’t found the place where the bus stops.

What’s an alpha to do when he’s found his fated mate, but she reacts to the news by kicking him in the balls?

Gretchen Halbmond became a diehard Daddy’s girl the day her mother ran out on them both. She doesn’t believe in love and isn’t looking for it, but when her ailing father is attacked and left bloody by wolves on the wrong side of the law, she goes out in search of what she does believe in: Justice.

Sheriff Talon Garde has way too much on his plate. Humans have breached shifters’ carefully guarded privacy and are about to go public. If he can’t stop them, what happened to Gretchen’s father is going to be the least of everyone’s worries.

More importantly, despite Talon’s rep as a bad ass alpha whose growl strikes fear in the hearts of criminals, Gretchen’s scent makes him go all squishy inside. She’s THE ONE, he’s sure of it. There’s just that small matter of convincing Gretchen it’s pointless to fight fate…and surviving the way she fights it.

Standalone novel with NO cliffhanger.

NOTE: While this is book 2 of the Huntsville Pack series, all the books are completely standalone. The series does revisit favorite characters, but the plots don’t carry over from book to book, they are resolved at the end of each story.

She gasped when she finally pieced together what she was seeing. Bones. Dozens of them, stripped clean and carefully hung in the brush with rough twine. “Umm, Talon?” She pointed to what looked like a human leg bone.

“Yeah.” He turned back to look at her. Following the direction of her gaze, he leaned down and yanked one of the bones free.

“Nope,” came Talon’s short reply. “But it doesn’t change our plan.” He tossed the bone away and motioned for her to follow him. “Come on. Don’t get sidetracked.”

“He decorates his house with dead things,” she hissed at him. “You don’t think that’s a problem?”

Talon just shrugged. “These bones are so old, they don’t even smell. It’s not an immediate threat.” He turned back to look at her once again. “Or do you want to wait in the car? Is that it? You’re scared?”

Gretchen drew herself up to her full height, which didn’t accomplish much given that Talon was a good head taller than her. Still, she had her pride and he’d just insulted it. She would stand as tall as she could. “I’m not scared. I’m horrified, but not terrified. I’m not going to hide in the car either.”

Talon tapped a finger by his eye. “Then focus, Halbmond. This isn’t the time to get lost in the small details. It’s just the two of us against whatever’s going on here. We can’t afford to get distracted.” He walked on, his stride long and full of purpose. Clearly, he didn’t plan on waiting for her any more.

Gretchen hastened to catch up to him, not wanting to be left alone with Axel’s gruesome lawn ornaments. They crept around to the back of the house, same as they’d done earlier that night with the human monster hunter. This is getting to be a theme, Gretchen thought. One I would prefer to avoid. She could not wait until this was all over and she could get back into a kitchen.

“I’m going to bake a shitload of cookies and cakes when this is over,” she muttered under her breath. By her estimate, she needed to bake a few dozen cookies, a couple of layer cakes and mix some big batches of ice cream to feel normal again.

Talon heard her and gave her a puzzled look. “What are you going on about?”

“Nothing.” Her cheeks grew hot.

“I know. It’s just…baking is my coping mechanism.” She bit her lip, worrying it back and forth.

“Bake me some brownies then, but later, okay? Until we’re done here, can we please stay on task?” he asked, his tone aggrieved. Then, his expression softening, he put a thumb on her lower lip and tugged it free from her teeth. Cupping her cheek in his hand, he ran his thumb over her mouth. “Relax, Halbmond. I got this. It’s going to be okay, all right?”

She just nodded, too embarrassed to say anything. Not to mention, the way he’d touched her had been so tender and full of kindness it had rocked her a bit. It set off the same fireworks in her system that their kisses had. Her wolf had perked up, too, very happy with attention from the alpha male she liked so much.

NY Times and USA Today Bestselling author Michelle Fox lives in the Midwest with her husband, kids, the occasional exchange student and two, sweetly disobedient dogs. She loves fantasy and romance, which makes writing paranormal romance a natural fit. Occasionally, she goes through a maverick phase and writes contemporary romance. In her spare time, she’s been known to shake her bon-bon at Zumba, make spectacular cheesecakes, hoard vintage costume jewelry and eat way too much ice cream (Ben and Jerry’s Karamel Sutra for the win!).

SHATTERED
After witnessing the murder of her lover and the heartbreaking loss of their unborn child, Savannah wants to end it all.
Then she is given a second chance at love.
Sadly, even when life hands you second chances it doesn’t always follow that things will work out the way you want them to.
Some lies can just be too painful to move on from.
What’s worse than being Broken?
Shattered… 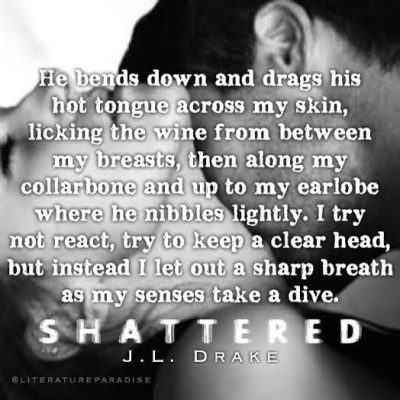 Excerpt:
“I’m sorry for what happen to you, but I’ll never be sorry for tracking you down and failing in love with you.”

J.L. Drake was born and raised in Nova Scotia, Canada and later moved to Southern California where she lives with her husband and two children.She released her first novel “What Lurks in the Dark” in June 2014 but after the series got picked up by a publisher it was pulled. It will return late 2015. “Bunker 219” is found in the Unleash the Undead Anthology. Her “Broken” Trilogy is being released now, as well as, “All In,” in the Second Chances anthology comes in June 2015.

Other places to find her,

Ebook of Broken or Shattered by J.L. Drake