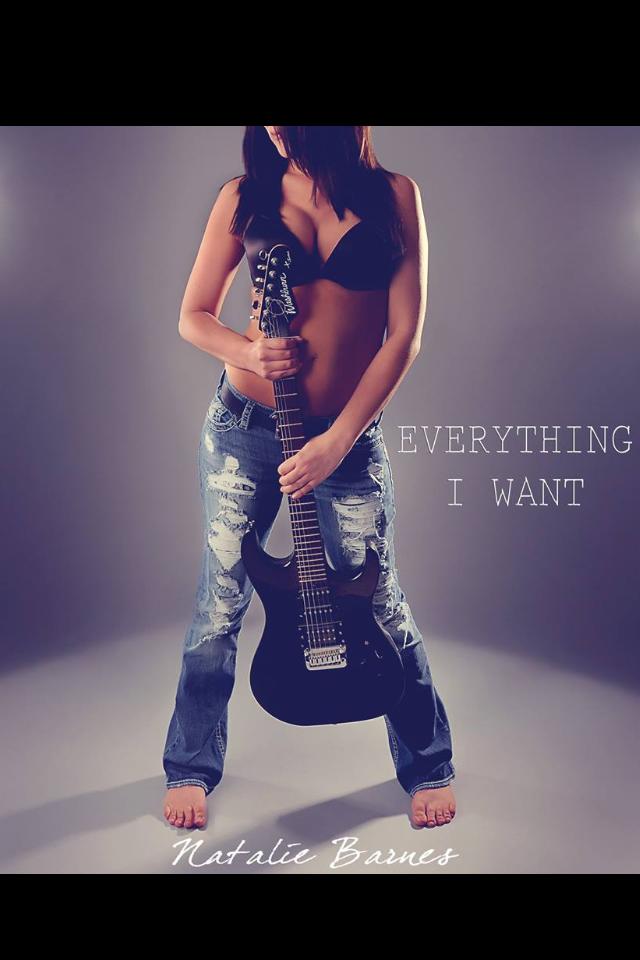 Everything I Want by Natalie Barnes-Author

“I can’t freaking believe this! Me, Sophia Mancini, and my band just got signed with a major recording label! And that’s not all. We get to open for Undead
Society on tour! I’ve always had a thing for their lead singer, Tristan Scott. He’s dangerously sexy. Finally meeting him, I soon realize that Tristan is
nothing more than an arrogant, conceited prick!

He gets off on making this tour difficult for me as much as possible. But it’s so worth putting up with his arrogance when I feel that high I get when
performing. Not even Tristan can take that away from me.

He intimidates and excites me all at the same time. Trying to put up a front that he doesn’t affect me, I find that it’s getting incredibly harder to
pretend. Every time that I’m around him, I feel myself weakening. He’s trying to break me, dominate me, and take me.” 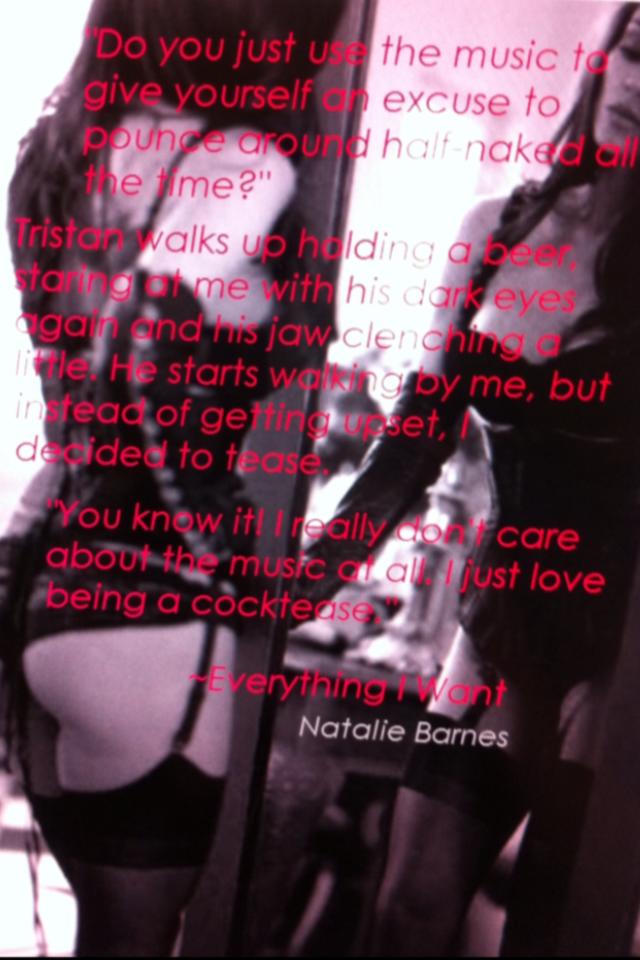 After all, even demons deserve a chance at love.

With her angelic wings and his demonic horns they were never meant to come together. But his red eyes trap her and her seductive wings lure him. Their hot demon blood crashes. What starts as one night of carnal pleasure turns into an adventure of epic portions.

Shades of Dungeons and Dragons twisted in wicked ways.

Within days of meeting Lilah and Glaurakos fall across the path of an evil sorceress who traps them in a strange and dangerous “other world”. The threats in the new world are perilous, yet their lust for each other is far more frightening. Will their bond be strong enough to make it out alive?

Against all odds of the damned, can love grow between two half demons?

This fantasy novel is a twisted romance at its core inspired by Dungeons and Dragons/Forgotten Realms, by best selling Paranormal Romance authors J.E. & M. Keep.

As the slaver’s caravan rolled along, the wagon in which Glaurakos was held bumped and jostled wildly. The make of the transport was clearly designed for security, not comfort. It was enough to send someone with poor balance toppling to and fro. He was in a different world from the chaotic realm he’d escaped, but the confinement… that was familiar.

The terrain was rough, following the road less travelled along the path from Sho’ar into the smaller trading camps. It was also more private, which was what the slavers needed. Glaurakos could see the thick forest as they slowly made their way past it, the hot sun beating down on them. It didn’t bother him, though.

An odd mix of the beautiful and the terrifying, Glaurakos was born a Fae-Demon. His elven blood manifested in his bright, golden hued skin, handsome facial features and orange-gold hair that fell down around his back and shoulders, straight and silken-smooth. The other half of him was that of a hellish demon, with massive back-swept horns, leathery bat-like wings, glowing red eyes, sharp teeth, clawed fingers and six-and-a-half-foot height.

He was a rare beast on the surface world, a prize for any slaver smart enough – or stupid enough – to try to capture.

He was not bound in the caged wagon, but he was kept there alone, and a crisscross of metal mesh kept him from summoning his sword to him and fighting back against his captors. The damnable humans knew what a price they could fetch for him, and they hungered for it. Any demon, even a half-breed, fought with mastery in battle that a human could never obtain.

Glaurakos seethed as he plotted his escape.

It had been a while since the newest addition had been added to the caravan: a beautiful winged woman who was chained to the back of the caravan, but a few feet from him. She was walking with her head down, following closely after the wagon. Her slender form looked even smaller against the manacles around her hands, their enchantments no doubt keeping her from casting spells. These slavers weren’t the usual, trading in grunt workers. They were seeking the big wins.

She looked to be an angel with her large, feathery wings and her delicate features. An innocent, someone easily manipulated and trusting. Even for a fiend like him. She was tall and svelte. Her body was naturally slim, but she looked like she had recently shed some weight, leaving her cheeks a tad more hollow than usual. She tried her best not to move her manacled hands to draw any further attention to herself. Her wings were bound behind her, the tips pressed together painfully, enough to cause a constant cringe to taint her otherwise attractive face. Her porcelain white skin was framed by a black shock of hair, and he had no doubt that this was how she looked at her worst.

These slavers were exceptionally clever, or terrifically lucky, to have found and captured two of the rarer species of humanoids around.

The slavers spread out after a time, keeping a wide sentry on the moving caravan. He managed to fight them off before they could shed him of his thick and intricate armour, a series of chest and leg plates with a short cloak draped about his shoulders and back. Perhaps they figured that once they got him to their destination they could better steal his earthly goods. He had to act fast, and Glaurakos shifted to move onto his knees.

“Angel. I can break us free if you help me,” he whispered, his voice preternaturally deep and raspy. There was a terrifying sense of command that permeated his words, not by practice, but by natural inheritance.

Lilah raised her freshly bruised eyes to him, clearly having taken a couple of blows in the struggle to get her to go with the slavers. Her expression was sour and cruel, though it brightened at his promise. She glanced around at her surroundings briefly with her eerie, green eyes.

“What do you figure?” she asked, her voice nearly ethereal, a practiced combination of sweet and tantalizing with an undertone of hidden promise.

“They haven’t stripped me of my magic. They think me a mere warrior,” he grinned, baring his sharply fanged teeth slyly. “But without help outside, my spells are useless. So…” He paused, some reluctant doubt tingeing his voice as though he didn’t expect her to agree to his plan. “With your agreement, I will shift us, summon my sword and free us to escape to safety.”

She averted her eyes from him, keenly on the lookout for any who may notice her speaking to him.

“What do you need me for?” she asked. Her voice was skeptical, but still filled with hope.

“These bars prevent me from magically passing through,” he rasped, licking his lips briefly with his bizarrely pointed tongue.

“However, with a spell I could switch our places. It’s not the same, you see? An eventuality they are not likely to have prepared for.” He smirked mischievously at her. “Once I’m outside this wagon, I will be able to get us out of here without issue. They only caught me by dumb luck in the first place. So, what say you?”

His large, leathery wings twitched upon his back anxiously. He had not nearly enough room to unfurl them.

She opened her plush lips to argue before shutting them. Whether she was chained helpless to the wagon, or captured within, there were few options for escape. She looked at him for as long as she’d dared before her eyes flicked away from his harsh gaze.

“If you leave me, I will find you,” she said finally, jutting her jaw in annoyance at the reluctant and tentative agreement. “I know my way from here.”

Pursing his lips for a moment, he smiled widely, giving her a stern nod.

“I will free you,” he said, eyeing her wings. “Do they work still? Or did they just bind them? I want to know before I try to free us. Things will move fast once I’m out, I don’t have time to figure out how to break your chains once we start.”

“They are bound without magical means. Though I will need to be freed of it before I can fly,” she replied.

“Get ready,” he said with finality. His voice was preternaturally rich and deep that everything he said sounded commanding and authoritative.

Glaurakos stood as well as he could in the caged wagon, focused and determined as he prepared his gambit. It was a fairly simple spell, but required her consent to be dragged through the ether.

Without further delay he muttered the profane words.

They are long term, loving partners in a very happy relationship and because of this, they love to torture their characters. Dark romance touches all of their stories in one way or another, from elicit trysts to forbidden love.

Owners of Darknest Fantasy Erotica, Joshua and Michelle Keep have been writing smut for over 10 years.

18+. Content warnings and word counts are available on the second page of all books.