Annabelle’s a free woman. Her only desire is to become a healer like her dead father once was and to protect the people she loves. Life is sweet. That is until an outlaw by the name of Jeremiah ‘One Finger’ Polk was found unconscious on her land. Annabelle’s initial curiosity over his presence and desire to heal him from his serious wounds blooms into a forbidden encounter that will threaten the towns’ very existence and even her own.
Jeremiah Polk is a wanted man. Driven by the need for vengeance and retribution, he barely escapes the hangman’s noose and gun. When he wakes and finds a beautiful brown skin woman nursing him back to health, he thinks it’s a dream. He soon learns of the free people of color and the hidden town at the foot of the mountain that could be his sanctuary.  He also finds himself drawn to the promise of redemption. But will his demons, both real and imagined, rob him of the chance?  Can love survive the racial tensions between Annabelle and him post-civil war?
Miss Kitty is what they call her. However, her Christian name is Cora, and she runs the saloon and whores of Nicademus. Escaping New Orleans and the chains of a placage, she has founded a home and thriving business in Nicademus. However, the unwanted desires of the town’s sheriff, her passionate affair with her Chickasaw lover, and the new threat of the dangerous man who hunts her from her past all collide in Nicademus and threaten to destroy her.
Red Sun, Chickasaw, and the lone survivor of his tribe out of White Rock Mountain, trusts no one. He brings the orphaned Annabelle and himself to the town of Nicademus for a chance to start again. Ten years later the bitter memory of his slain people keeps him locked in the past. However, his new love affair for his ‘soiled dove’, Cora, keeps him sane. Nicademus is his home. He will risk it all to protect the town and the woman he loves.
In 1866, a town run by freed slaves, called Nicademus, is the promise of the future. The story of the town and the passionate, dangerous, and infamous exploits of its citizens are still whispered from the lips of people today. This fictionalized tale reflects some of their story.  You will search for truth in it.
About the Author
Sienna Mynx is your naughty-author of Contemporary, and Historical Multicultural Romance. Her dramatic tales of forbidden love are for readers that love the bad boys but desire to be the women to tame them. Variety is the spice of life, and each Sienna Mynx tale reflects the diversity that continues to remain colorblind. Sienna currently has 32 published books, as an indie author under her publishing company The Divas Pen LLC. A current resident of Georgia, Sienna Mynx has emerged into the e-publishing scene with spicy uncompromising tales of decadence.
Other Spicy Historical Romances written by Sienna Mynx:
Buttercup – 1940’s Prohibition IR Romance
Harmony – 1920’s Harlem Renaissance Romance
To learn more about the Battaglia Series, future releases and projects currently underway pleas visit Sienna Mynx at The Divas Pen ( http://thedivaspen.com )
Sienna also has Harmony in her Historical themed books:

$4.99 Amazon
$4.99 Nook Link
It’s the roaring 20’s and the Black Renaissance has exploded in Harlem. From Marcus Garvey, to Ethel Waters, Sugar Hill is the place to be. That’s also true for The Cotton Club’s jazz singer Harmony Jones. Her soulful voice and unique beauty draws the attention of the most ruthless Sicilian mob boss Vincenzo ‘Vinnie’ Romano. And when her brother––a small time bootlegger––goes missing, Harmony is his only hope.Harmony is a story of obsession and perseverance. A tangled tale of passion, lust, love and hate when two unlikely hearts collide.

A story of second chance love set between London and San Diego.

Thirteen years ago Jonah Kennedy was one of America’s top tennis players, whose six-foot-three bad-boy California looks won him hordes of female admirers.

Thirteen years ago Claire Jackson, a fiery, aspiring artist from London, was the woman who stole his heart.

But the two held a secret which tore them apart and sent Claire running back to England.

Thirteen years later and both divorced, their paths cross again. Their attraction is even deeper – they feel destined to be together. Claire’s jealous ex, however, has other plans.

Can Claire and Jonah hold on to their second chance at love or will their past secret haunt them for ever? After all, thirteen is only lucky for some….

It was 9 p.m. and the soft light was slowly starting to fade. Claire’s shoulders shivered as the temperature dropped and she slipped on the crop black cardigan she’d brought with. There was an empty bench outside the wrought-iron gates which guarded Kensington Palace, the same gates which mourners had flocked to, to decorate with flowers and wreaths and messages of condolence after Princess Diana had died. As they sat down Jonah still didn’t free her hand. They stared straight ahead at the gates for a few seconds and then Jonah broke the silence, turning to her.

“I tried contacting you after you left you know,” he said quietly. “I never wanted you to go.”

Tears began welling in Claire’s eyes and one dared to tumble over the edge and dribble towards her nose. Jonah wiped it away with the pad of his thumb. She nodded, but didn’t dare to speak. After she’d left, she’d changed her phone number, her e-mail address and even her home address. She’d not wanted to be found. She’d thought she was doing the right thing for everybody.

She cursed herself for letting that question pop out her mouth. She didn’t want to know that he’d shacked up with some tall, leggy supermodel. Lord knows, there’d been enough of them around, clamouring to take him off her.

“She was a mistake,” he said, tracing his finger down from Claire’s wet eye and along her cheek towards the back of her neck. It was a gesture so sensitive and tender that she felt her head tilt towards his hand and her eyes close. She’d never in her wildest dreams imagined being with Jonah, ever again. This was almost too much, too soon, too hard to take in. Her life had felt dull for years and, to an extent, she’d been responsible for letting that happen. She hadn’t believed she’d deserved better. Not after what she did. And now, from nowhere it had sped into fast forward.

“But she gave you Martha,” Claire reminded him.

“Yes, and for that I am truly grateful.”

Jonah leaned forward and cupped his other hand around Claire’s face. It was safer to close her eyes and not to try to read his expression, or guess his thoughts.

“Open your eyes,” he commanded.

With difficulty she obeyed and found herself staring into his deep, grey pools. What she thought she could read in them unsettled her. It felt like nothing had changed in the intervening years, even though she knew so much had. A lump caught at the back of her throat and she could feel her lower lip trembling. Part of her wanted to run away, scared of being exposed to what was sure to be emotional turmoil. But another part of her was frozen to the spot. He had her face clasped in both his hands and once again she found her eyelids closing as he caressed her cheeks.

“I have to admit something,” he said.

She nodded, eyes still tightly sealed. Here it comes, she thought. He’d given her the good stuff and was now about to deliver bad news, to tell her he was in a new relationship or something. She didn’t want to see him as he said it.

“You know I think you’re beautiful,” he continued. “But, I have to admit, I prefer you without make-up.”

Her eyes snapped open as she giggled.

“I don’t normally wear make-up. This was put on me this morning for some silly screen test Georgia put me up to.”

He raised a questioning eyebrow.

“It was nothing,” she brushed it off.

She wanted to close her eyes again, but his gaze held her magnetically. She wasn’t sure if her thirty-seven year old heart could keep up the cracking pace it was now thumping at and she knew she must look ridiculous. Her lower lip was quivering uncontrollably and her porcelain make-up was no doubt now a streaky mess. Idiot, why hadn’t she removed it before coming? She couldn’t stop herself from looking down at his mouth, his luscious, thick, sensual lips. No-one’s lips had ever matched up to his, either before or after. It was as if he could read her mind.

She clamped her eyes back shut and nodded.

“I can’t watch,” she whispered.

She waited for so long that she considered telling him to hurry up, but then she felt his teeth gently take her lower lip in its grip, as if trying to stop the tremor. When she’d calmed down, he released it, pulled away for a second and she could feel the smile on his lips as he crushed his mouth deliciously into hers.

Jo qualified as a lawyer before moving into journalism, working for the BBC and reporting and presenting for ITV on holiday, consumer and current affairs programs. She writes for several national UK newspapers including the Daily Mail, the Telegraph, the Guardian and the Express and was the anonymous author of the Independent’s hit column: Diary of a Primary School Mum. Now is our Time is her third novel.

My Forever by J.L. Perry

My Forever is a continuation of Brooke and Logan’s fairy-tale love affair that started in My Destiny.

Brooke finally lets go of her insecurities and accepts what’s in her heart…her undying love for Logan. After everything they went through in the beginning

of their relationship, Brooke’s hopes of a happy life with her soul mate are crushed when tragedy strikes them yet again.

Logan finally has everything he ever wanted. Now that the threat to Brooke’s safety is behind them, all he wants is to live out the rest of his days with

the woman of his dreams. Unfortunately, we don’t always get what we want. He has no idea that over the next few years they will face their toughest

Will their love for each other be strong enough to survive what lies ahead? Or will their fairy-tale finally come to an end?

Join Brooke and Logan in the final and dramatic conclusion to the Destiny series. 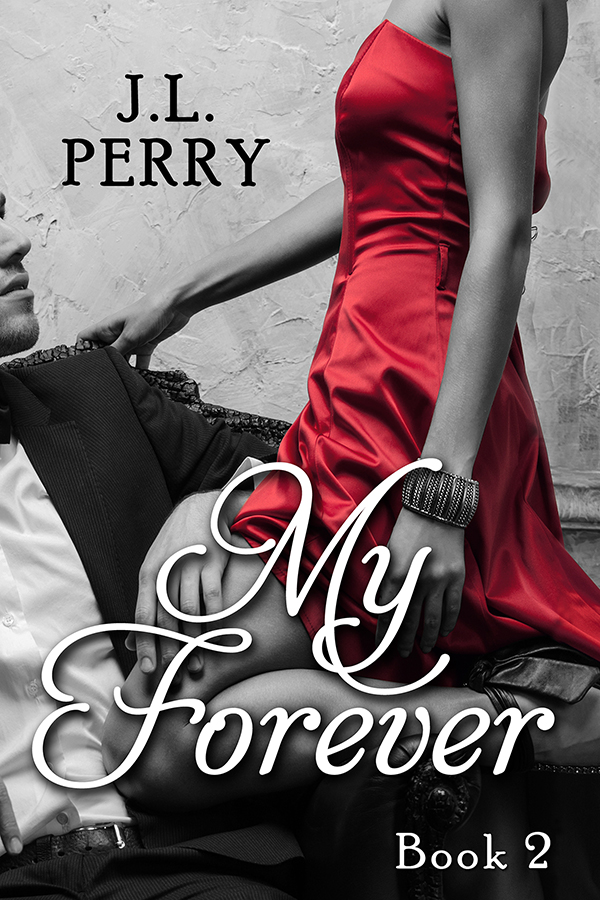