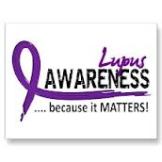 Successfully managing lupus starts with awareness: awareness of your particular symptoms and how your illness affects you; awareness of what you can do to prevent flares, and what to do if you do experience a flare; awareness of any changes in symptoms or physical conditions that could suggest disease activity; awareness of the tension and stress that often accompany chronic illness; and awareness of the best coping strategies and techniques to reduce that stress.

But awareness by itself isn’t the complete solution. You will want to use that awareness to plan and to act in ways that limit or avoid the burdens, discomforts, and difficulties that lupus can cause, so that the illness does not stop you from doing the things you enjoy in life. There are also a number of lifestyle adjustments you can make to help keep the physical symptoms of lupus under control. Learn more about lifestyle adjustments in the Coping with Lupus section.

How May Lupus Affect My Life?
Having lupus can make the demands of everyday life challenging. When lupus is active, symptoms of joint stiffness, pain, extreme fatigue, confusion, or depression can make even simple tasks difficult, and sometimes impossible. And, because you may not have any visible signs of disease, the people around you may not realize how much discomfort and pain you are experiencing, or they may not know that you are sick at all.

You should not ignore the limitations that come with this disease. But there are steps you can take to stay active with work, relationships, and events that enrich your life. These actions and strategies can lighten the burden of your illness and allow you to lead a life of accomplishment and achievement.

Explaining Lupus to Others
Explaining lupus is a challenge. It is not easy to describe a disease with symptoms that are so varied and yet often not visible, whose effects can range from manageable to life-threatening, and whose course is sporadic, alternating between periods of wellness and flare. Explaining lupus is made even more difficult because the causes of lupus are unknown.

Lupus in the Family
Family life will inevitably change when a family member receives a diagnosis of lupus. This section looks at how you view yourself, your family, husband and even children and how they view this new journey that they will be taking with you. Open communication within the family about your lupus may help to allay fears and help to foster an understanding and supportive environment for all family affected by the disease.

This disease can be a bitch when you are taking steroids , when i was on high dose’s of steroids i asked my doctor for a Xanax pill..Believe me it works I was less bitchy towards family and friends …  have a great Saturday  everyone , Denise

Three weeks. All Alyssa O’Riordan needs is three weeks away from her wealthy life in New York City, to clear her mind and decide what she wants from her life. A dude ranch in Wyoming seems like the perfect place for a temporary escape from the cage her life has become.

What she doesn’t expect is to come face-to-face with a handsome cowboy, who’s just as grumpy and rough as he is good-looking. All of a sudden, the promise of a relaxing, invigorating holiday seems long gone.

Three weeks. For Sean Maclaine, three weeks around the new guest feel like an eternity. After his first-hand experience with the upper class, rich daddy’s girls have become his worst nightmare, so when Alyssa O’Riordan shows up at his family’s ranch, he knows the time won’t go by fast enough. All he has to do is stay away from her, and count the hours until she finally goes back to New York.

Three weeks. Will three weeks be long enough for them to get over their prejudices and start looking beyond the surface?

Alyssa checked her watch and her face fell: it was past one o’clock. She’d been away almost four hours and she’d slept nearly the entire time–no wonder they were all so worried about her disappearance.

How had it happened? She hadn’t slept so soundly in ages, she couldn’t believe she had been able to sleep so long without ever waking up and noticing it was time to go back.

She felt terribly sorry for causing so much trouble; she’d have to make sure to apologize profusely to Mrs. Maclaine as soon as she got back to the ranch.

“I’m sorry, I guess I fell asleep and didn’t realize it was so late…”

“If you wanted to take a nap, you could have done so in your room or in the backyard. You really didn’t need to come out here and have us all worried about what might have happened to you,” he cut her off, curtly. “But no, of course Miss City Girl had to have it her way, or she wouldn’t be happy. Because that’s what you’re used to, isn’t it? Daddy always gives you what you want, so you think that everyone else will do the same, no matter what.”

Alyssa was close to tears, and didn’t know what else to say to apologize; nevertheless, he was still yelling at her, and his tone was so harsh she thought she was either going to start screaming or kick him hard in the shins.

What right did he have to say those things to her, when she’d made it clear she was sorry?

“What’s wrong with you?” she shouted, throwing her hands in the air in exasperation. “I said I was sorry, I didn’t do it on purpose. Why do you have to be so thick, now?”

“Just because I’m a country man doesn’t mean I’m stupid!” he said in a loud and harsh tone.

Alyssa stood up, and he followed suit. She was furious and desperately wanted to tell him all she thought of him, without worrying too much about the consequences. She’d had enough now.

“I never said that!” she barked, feeling insulted; not only had he been awful to her all week, now he was also putting words in her mouth, making her look like the bad witch.

“Your riches don’t necessarily make you better than me,” he said, adjusting his hat on his head. His eyes were ice slits, staring at her from underneath the brim of his cowboy hat.

“I never said I’m better than you. Yes, I come from money, so what? It’s not my fault.”

“It is if you look down on people who don’t belong to your happy little world, and treat everyone else as if they should be at your service, satisfying all of your whims, just because you can afford it.”

“I don’t!” she yelled, exasperated from all this nonsense. “I’m not that kind of person at all. And what right do you have to say these things anyway, when you barely even know me?”

An avid reader since her childhood years and being an only child, Roberta always enjoyed the company of her fictional friends from the children’s books she loved reading, while she dreamed of writing her own stories one day.

It was when she discovered novels by authors Rosamunde Pilcher and Maeve Binchy in her teenage years that she realized it was time she put down in words the stories she had kept well hidden in her mind until then.

What started as a hobby, soon turned into a real passion and a way of life, until she could no longer keep the stories to herself, and decided to get over her fears and share them with the world.

Roberta lives in Italy, but her dream is to move out of her country and live either in a thatched cottage in the Irish countryside or in a country house with a swing on the back porch, somewhere in the United States, where she would love to spend her days writing novels as a full-time job, and maybe one day even get as far as writing a screenplay for a movie.