With the devil in charge … there could be hell to pay

She needs a protector… Once seduced by whispered promises of a faithless lover, Phoebe Scott is determined to make a name on the Covent Garden stage, but after three years of bit parts, she realizes she’ll never achieve her goals on her own merits. Acknowledging her success is dependent on a powerful patron, Phoebe is now resolved to find a protector to secure her future. With this goal in mind, she seeks out the best prospects at London’s most notorious brothel.

He’s avowed to celibacy… Sir Edward “Ned” Chambers has been lost and lonely since his wife’s death in childbirth. Burdened with blame, he has sworn to a life of celibacy, but after three years, he is inwardly edgy, irritable, and increasingly discontent. Perceiving the cause behind Ned’s unhappiness, as well as the obvious cure, his best friend and rake of the first order, “The Devil” DeVere, is hell-bent to return Ned to the land of the living. DeVere’s machinations result in an outrageous wager that could lead Ned to a new love… or land them all in the Tower!
All bets are off in in this racy Georgian romp! (romantic comedy with mature content)

THE VIRGIN HUNTRESS by Victoria Vane

All’s Fair in Love and Abduction

In the second installment of the award-winning Devil DeVere series, Ned’s daughter Vesta is preparing for her come-out only to have her world turned upside down when her father returns from London with a bride of his own! Put out that he is so wrapped up in Phoebe, Vesta accompanies her godmother, Diana, to town where she meets and falls instantly in love with the gallant Captain Hewett DeVere.
“Hew” DeVere, younger brother to Viscount Ludovic “The Devil” DeVere, has returned from the war with plans of selling his commission and settling down. He quickly becomes enamored of the older but beautiful Diana, and barely notices eighteen-year-old Vesta. When Hew fails to respond to her feminine charms, Vesta takes extreme measures to capture the object of her desire, but Hew didn’t survive the worst of the war only to succumb to Vesta’s wayward wiles.
“You conniving creature! How can you possibly think I could ever love such a spoiled, petulant, self-absorbed, and scheming little wretch?”
Proving the adage that opposites attract, this hilarious romp pits the would-be huntress against the gallant hero in an epic war of wills. (Romantic comedy with mature content)

THE DEVIL YOU KNOW by Victoria Vane

Sometimes the Devil is Disguised as a Gentleman…
In this third installment of the award-winning Devil DeVere series, DeVere is finally center stage when Ned, Annalee, and her cousin, Diana arrive at DeVere’s estate for a weekend of horseracing. From the first meeting, DeVere makes his interest in Diana acutely known. Although she sees no harm in a light flirtation, she doesn’t intend to become another notch on his bedpost. Nevertheless, DeVere fascinates her.
Ned gave her a meaningful look. “I hope you’ll take extreme care in any dealings with him. He is ruthless and calculating when he chooses to be and has a strong predilection to manipulate and exploit the vulnerabilities of others—when it suits his purpose. He just can’t help himself. It’s not that he’s evil incarnate, or anything like that; it’s just that he has low tolerance for weakness, incompetence, or buffoonery.”
Diana lifted her brow. “You know I am no fool, dear Edward. I take full responsibility for my actions and have already made clear what I am willing and not willing to sacrifice.”

Although DeVere is outwardly arrogant, ruthless, unpredictable, and manipulative, the private man is quite another creature—intensely loyal and fiercely protective of those few he cares about. Diana also maintains a false front to the world. Her twelve year marriage is a mockery and she feels unfulfilled and undesirable which makes her all too vulnerable to DeVere’s dangerous charm. After events take an unexpected turn, Diana’ most erotic fantasies become reality when she seeks comfort and affirmation in the devil’s arms. But little does she know that the fire he ignites within her will burn long after she leaves Woodcote Park.

THE DEVIL’S MATCH by Victoria Vane

The devil is a tempter of women

In this fourth installment of the award-winning Devil DeVere series, Diana has come to London as her goddaughter’s chaperone. Wanting to avoid her erstwhile lover at all costs, she nevertheless has no choice but to appeal to DeVere for help when Vesta mysteriously disappears. Although once nearly consumed by her passion for DeVere, four years has reduced the former inferno to bitterness and ashes.
Ludovic’s time abroad has only served to deepen his debauchery. He’s become jaded, world-weary, and bored. He also recognizes with self-annoyance that the marks of his discontent have only increased upon a certain person’s arrival in London. When Diana makes her appearance in his den of iniquity in all of her glorious self-righteous fury, he suddenly feels alive again.
“Damn you to hell, DeVere!” she cried, jerking out of his hold. “Yes, I want you now, but I would despise myself for it the moment we finished.”
“Why?” he asked, confounded.
“Why? Because I once confused passion for deeper feeling. I won’t make that mistake again.”
“But don’t you remember how it was between us? I can bring you rapture. You know that. What harm is there?”
She scoffed, “Surely the same words the serpent whispered to Eve.”
While DeVere is once more hell-bent to have Diana back in his bed, she will do whatever it takes to bring him to his knees.

A DEVIL’S TOUCH by Victoria Vane

This short erotic installment in the award-winning Devil DeVere series can stand alone as a complete story, but also serves to bridge The Devil’s Match and Jewel of the East (Salime and Simon’s story).
In her last month of pregnancy, Diana, Viscountess DeVere, has barely settled into her new life and role as “the devil” DeVere’s wife, when her increasingly restless husband receives an urgent summons to London. When Diana inadvertently discovers a message he received from a known courtesan with whom he was formerly linked, she fears her marriage is over before it has begun.
They were barely three months into a marriage that had begun on rather shaky ground. Was it possible that for him, the novelty of it had already worn off? This had always been Diana’s greatest fear, for Ludovic was a man with a voracious sensual appetite, one he had honed with years of endless variety and constant, unrestrained indulgence. Diana, on the contrary, had known only one true lover—this same perplexing man who was now her husband—the one who had made her heavy with his child…and now left her alone in a cold bed.

DEVIL IN THE MAKING by Victoria Vane

Every Devil Has A Beginning…

In this first of three prequels to the award-winning Devil DeVere series, we meet Ludovic, Ned, and Simon as youths in this riotous Georgian romp written in the tradition of Fielding’s Tom Jones.
Since their first meeting at Westminster, Ned, Simon, and DeVere had forged an iron-clad bond that had maintained them through nearly six years. From the outset, Ludovic’s scandalous family secrets had set him apart from the other aristocratic scions as an “untouchable.” Deny it as he tried, the ugly truth remained that his mother was indeed the biggest whore in England, and his presumed father, the viscount, no less than a pox-ridden madman.
Likewise, Simon Singleton’s poetic proclivities had instantly made him the bullies’ mark, and even Edward Chambers’ great size had served as little deterrent for the upper classmen’s taunts when accompanied by adolescent awkwardness and a broad North Country drawl.
By the end of the first form, however, DeVere’s finely honed shell of arrogance, Ned’s increasing brawn, and Sin’s rapier wit, had given birth to an unholy triumvirate that came to wreak perpetual and unchallenged havoc upon Westminster School. Now, it appeared their illustrious reign had come to an inglorious end.
Intent on serving up revenge on their tyrannical schoolmaster, a prank with the king’s lion goes comically awry, leading to a startling chain of events.

THE TROUBLE WITH SIN by Victoria Vane

This second prequel to the award-winning Devil DeVere series is a comedic romp featuring aspiring poet, Simon “Sin” Singleton, the hero of Jewel of the East.
The Trouble with Sin … Is the devil within… Sin has lived only for larks, laughter, and ladies of easy virtue, eluding defying, and flouting all manner of authority until his impetuous misdeeds finally catch up with him.
The wage of Sin… is twenty-five percent of the net! It seems a fantasy come true when Simon is offered an independent income by combining his two great passions— poetry and lewd women. Unfortunately, maintaining anonymity may be much harder than he thought…
Ned asked, “Are you not still bound for the clergy, Sin?”
Simon heaved a deep sigh. “It is my dear Mama’s fondest wish for me to join the church, but I fear my nature is quite incompatible with a theological vocation. I have searched deeply, and cannot seem to summon an inkling of pious sentiment, which makes me an exceedingly poor candidate for the clergy.”
“Even so, why would you wish to dirty your hands with something like this?”
“The answer is simple, Ned—I need the money.”
“But you receive a more than adequate allowance.”
“That he mostly squanders on women of easy virtue,” DeVere drawled.
“Admittedly,” Simon confessed, unabashed. “But now my father has reduced my quarterly and demands a full account of every ha’penny. I tell you, it is humiliating in the extreme! Unless I wish to live under such a yoke for the next three years— which I positively do not— I must make my own living. If I must travail for my bread, how better than by the fruits of my pen?”
“So you seek to combine your love of poetry and lewd women by writing poetry about lewd women?” Ned replied dryly.
Simon clapped Ned on the back. “Precisely! Don’t you see the ironic beauty of it?”
“What do you suppose will happen when your dear, devout mama gets wind of this?” Ned asked.
“I have taken every precaution to ensure my anonymity.” Simon retrieved the book from DeVere. “My contribution to this little work is, and shall forever remain, a well-kept secret.” 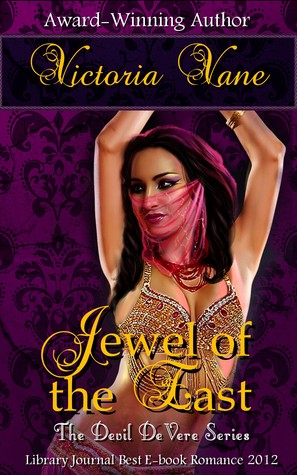 Book # 5 in the award-winning Devil DeVere series.
May be read as a standalone
Maimed by misfortune… healed by love…
His wounds run deep… Having once lived his life only for larks, laughter, and ladies of easy virtue, Captain Simon Singleton has returned from war a shambles of a man. Although free from six years of captivity, he’s still fettered by fears that confine him to a life of seclusion.
Her scars are well-hidden… Once the crowning jewel of the most lavish brothel in London, the exotic Salime finds her reputation and livelihood destroyed by a bitter rival. With a closely guarded secret stripped away, she fears no man will ever desire her again. Seeking aid from one who once saved her life, she accepts a proposition to become a companion to his war-scarred friend.
But love is the eternal cure… When circumstance brings these two damaged souls together, fate ignites a love story worthy of the Arabian Nights. (mature content warning).

Devil in the Making (Devilish Prequel#1)

The Trouble with Sin (Devilish Prequel#2)

(a full length compilation of the three Diana and DeVere stories)

A Breach of Promise